Skip to content
A leading DJ and producer on the international house music global scene for over two decades, MK(Marc Kinchen) continues to ride high on the success of his current single “17” and will once again tour the U.S. on the Family Affair Tour this spring. Fellow house music trailblazers Solardo, Will Clarkeand Nathan Barato will support on select dates.

The Family Affair Tour kicks off March 29 at in Orlando and will touch down in most major U.S. markets including NYC, Chicago, Detroit and more. Beyond the tour, MK will also be a highlight at major U.S. festivals this season such as CRSSD,EDC Las Vegas, Electric Forest and Lightning in a Bottle as well as several residency plays at Drai’s in Las Vegas. Prior to the launch of the Family Affair tour, MK will make two appearances during Miami Music Week at the Area10/Revolution Radio party at The National on Thursday, March 22 and the MK & Friends party at FDR at the Delano on Saturday, March 24. All dates follow below 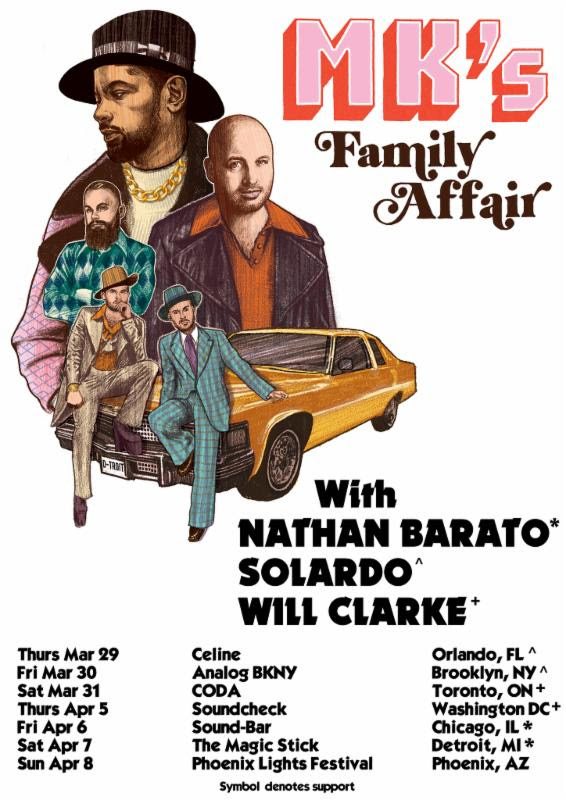 MK (Marc Kinchen) who has performed various dates in the States includingEDC in Vegas, the main stage at HARD Summer earlier this year and will be featured at the Imagine Festival in Atlanta as well.  Add all this to his in-demand remixes for the artists such as Rihanna, London Grammar, Solardoand Clean Bandit, alongside his original productions, MK has swiftly become one of the world’s most in-demand producers in dance music. Several of his earlier releases including “Always” “Burning” and “Push The Feeling On”were instrumental in first helping dance music cross over into the mainstream, while his 2014 remix of Wankelmut & Emma Louise’s “My Head Is A Jungle” has amassed over 45 million Spotify streams. His latest single “17” has served as a highlight to a great year for MK, where he continues to flourish overseas and break new boundaries in North America.  The track has been streamed on Spotify over 31 million times. The British have always had an affinity for quality house music, and they have embraced this MK song as well. The U.K. audience has catapulted “17” into Top 10 slots across many prominent charts including BBC Radio, Shazam and iTunes. All over Europe,“17” has received steady radio play from Denmark‘s The Voice to Belgium‘sTop Radio, plus breaking into Ireland‘s Top 10.
For more information on MK, please visit
Facebook I Twitter I Soundcloud

The post MK (Marc Kinchen) Riding High On The Success Of “17” appeared first on Hammarica.