This summer, on June 23rd and 24th, USC EVENTS will return to the breathtaking Gorge Amphitheatre to celebrate the sixth annual Paradiso Festival.

MARSHMELLO: Enigmatic masked DJ/producer Marshmello makes groove-oriented, synth- and bass-heavy electronic dance music. His career quickly blew up from the character’s conception in 2015, and his fan base continues to swiftly grow as he captivates #Mellogang members from all over the globe.

PORTER ROBINSON: Porter Robinson’s instantly recognizable sound has earned him the endless support of fans all over the world. Some might call Porter a prodigy, but that label belies his musical maturity and ignores his years of production experience, which reveal themselves in the way he blends the best of seemingly distinct genres into a style uniquely his own.

ZEDS DEAD: Toronto based DJ/Producer duo ZEDS DEAD has earned an excellent and unstoppable reputation as artists without borders – genres hold no bearing over their music as they transcend style and form with ease. Their passionate performances never fail to amaze audiences far and wide.

TIËSTO: Tiesto has become one of the world’s foremost trance DJs, routinely performing to thousands of fans at venues across the globe, appearing on magazine covers, receiving Grammy nominations, and producing platinum records. He remains deeply invested in many aspects of the dance music industry as an evangelist, global performer, tech startup advisor, and satellite radio DJ. 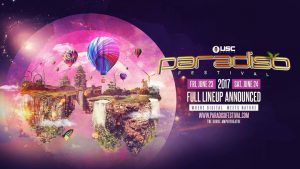